The History of Sous Vide Cooking (and Why You Should Start) 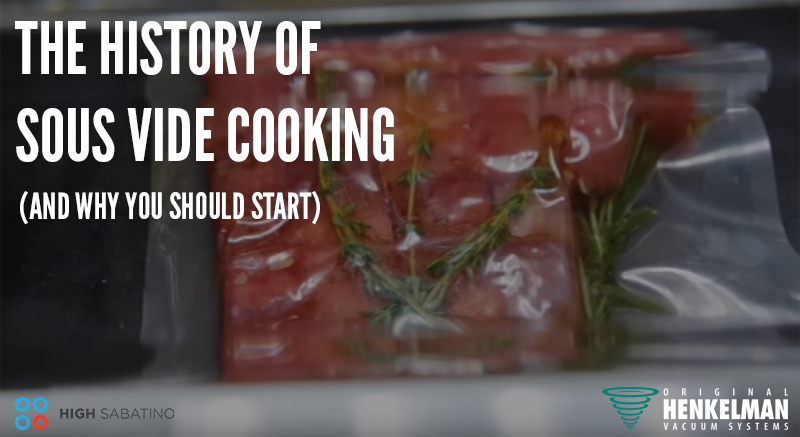 An evenly cooked ribeye steak. An egg with a runny yolk at its ideal consistency. A juicy chicken breast. Even tender, flavorful vegetables. What do all of these dishes have in common? They are ideally prepared using sous vide cooking. But what is sous vide cooking, exactly, and how has it become one of the most popular cooking methods in today’s foodservice operations?

In order to understand the history of sous vide cooking, let’s first explain the process. Sous vide is a cooking method in which food is vacuum sealed and cooked in temperature-controlled water, longer than normal cooking times and below the boiling point. It’s suitable for meat, fish, fruits, vegetables, soups, sauces, and desserts. In French, sous vide literally means “under vacuum.”

The History of Sous Vide Cooking

Sous vide cooking got its start in the 1970s, but the principles of this cooking process began well before then. Sous vide is comprised of low-temperature cooking, preparing food under pressure, and containerized cooking.

Low-temperature cooking can be traced back to 1799, in which physicist and inventor, Benjamin Thompson attempted to roast meat by employing air as a heat transfer medium, using a machine he designed to dry out potatoes. Not only was the meat edible, but Thompson also described it as “perfectly done, and most singularly well-tasted.”

It wasn’t until the 1960s that preparing food under pressure began as a preservation method. Researchers testing this method found that food had improved flavors and textures. Adding pressure through vacuum sealing proved to be the most effective technique, leading to concentrated flavors, even without cooking the food.

In the 1970s, Bruno Goussault, the chief scientist of a food manufacturer, became a sous vide pioneer, researching the effects of temperature on different foods and creating guidelines for cooking times and temperatures. He would go on to train many top chefs in the method of vacuum sealing with low-temperature cooking.

Around that same time in France, chef Georges Pralus, who would later be called the father of modern sous vide, found that when he cooked foie gras using this process, it’s appearance remained the same, its texture improved, and it retained moisture and flavors better.

The Benefits of Sous Vide Cooking

Sous vide cooking offers several advantages for chefs and foodservice operators. From the food itself, to the efficiency of the kitchen, sous vide makes a significant impact on any operation. By guaranteeing you won’t overcook your food, like an expensive cut of ribeye steak, sous vide helps protect your investment, reducing unnecessary food waste. The process also retains moisture inside of meat, and maximizes flavors by keeping them contained.

Sous vide cooking creates a more efficient commercial kitchen. By cooking through sous vide, chefs can pre-cook meat or other dishes in advance, and quickly sear it and get it out to the customer with the correct doneness, saving valuable time during the dinner rush.

[WATCH: Visualize the Benefits with the Sous Vide Cuisine Video from Henkelman]

The Must-Have Equipment for Sous-Vide Cooking

Now that you know the equipment needed to vacuum pack your food, what about the sous vide process? RATIONAL's combi oven features a sous vide option designed specifically for vacuum cooking. The SelfCookingCenter creates a completely steam saturated environment in the cabinet, with precise holding temperatures, making it perfect for sous vide. A thin sous-vide probe ensures that the core temperature of your food is achieved without comprising the vacuum in the bag.

Not only is a Henkelman vacuum packaging machine a must-have for sous vide cooking, it can do so much more, from infusing spirits and cocktails to dry aging and wet aging meat.

Visit our Henkelman Video Library to learn about even more vacuum packing applications for your Maryland, Virginia, or Washington, D.C. commercial kitchen: 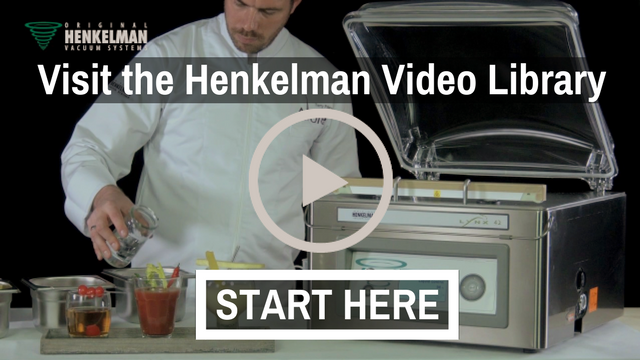